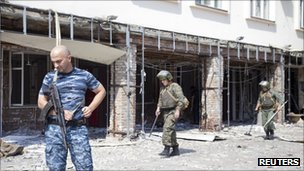 A triple suicide bomb attack has killed six police officers and two other people in the Chechen capital Grozny where Muslims are celebrating Eid.
A further 22 people were injured, five of them seriously, in the bombing late on Tuesday, Russian prosecutors said.
It appears the bombers used the first blast to lure police to the scene before setting off other explosives.
Correspondents say the attack is a reminder that the region in Russia's North Caucasus is far from stable.
Russian prosecutors released a statement naming two of the attackers as young Chechen men, aged 22 and 21.
No militant group said it had ordered the attacks.
Celebration day
It appears that all three attackers allowed themselves to be arrested before setting off their bombs.
The blasts took place in a densely populated district of Grozny, some 50m (yds) from a local parliament building.

The attack came as people in the predominantly Muslim republic celebrated Eid al-Fitr, the feast which marks the end of the Ramadan fast.
Chechnya's Kremlin-backed leader Ramzan Kadyrov said the attackers had chosen "the most sacred day for all Muslims" and "shown their real faces".
A spokesman for Mr Kadyrov, Alvi Karimov, said that as a result of the attack: "Thousands of people are shedding tears instead of celebrating."
An emergency official and a civilian were among those killed by the three bombers.
Last year, Moscow declared victory against Chechen separatists and there has been a relative lull in the violence under Mr Kadyrov.
But the whole North Caucasus is seeing an insurgency led by Islamist rebels, correspondents say.
at August 31, 2011