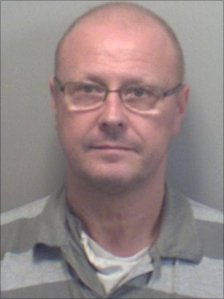 Kevin Wells contacted children online
A former teacher from Tonbridge has been sentenced to nine years in prison for a series of child sex offences, including rape.
Kevin Wells, 53, of Bishops Oak Ride, was jailed at Maidstone Crown Court after pleading guilty to 14 charges.
He was a head of year seven at Ravens Wood School, in Bromley, when arrested in February. None of the charges relate to a child at the school.
Computer equipment taken from his home showed he had recorded online abuse.
Detective Sergeant David Shipley, of Kent Police's Public Protection Unit, said: "Wells was in contact with a number of vulnerable children, for his own sexual gratification.
"He went further than online offending, and met with a very vulnerable and young child, where serious sexual offences took place.
"This case is an example of how online behaviour can change to real world abuse, and should highlight the dangers of child exploitation online and that these are real children with real lives that are damaged."
Following a search police discovered evidence showing Wells had downloaded child abuse images and videos.
'Suspended immediately'
He also admitted talking to children online using a webcam and engaging in sexual activity, which he recorded, and that he had travelled to Berkshire where he met a boy and abused him.
A spokeswoman for Bromley Council said "normal safeguarding procedures" were followed as soon as police informed Ravens Wood School that an investigation was under way.
She said: "Mr Wells was suspended immediately and he subsequently resigned from his post.
"The school's own investigation and that of the police found no evidence whatsoever of any wrongdoing connected with the school, its pupils, staff or equipment."
Wells was also made subject to a Sex Offences Prevention Order for 20 years, which will control the access he has to both children and the internet.
at August 31, 2011

Please let me know if you're looking for a author for your weblog. You have some really good articles and I feel I would be a good asset. If you ever want to take some of the load off, I'd really
like to write some articles for your blog in exchange for
a link back to mine. Please send me an email if interested.
Thanks!

my webpage ... exercises to jump higher

A fascinating discussion is worth comment.
I believe that you should write more on this topic, it might not be a
taboo subject but usually people don't discuss these issues. To the next! Kind regards!!

Magnificent beat ! I would like to apprentice even as you amend your
web site, how could i subscribe for a blog web site?

The account helped me a acceptable deal. I had been a little bit familiar of this your broadcast offered bright transparent concept

My blog: workouts to jump higher

Hello there, I discovered your site by means of Google even as looking for a comparable matter, your web site got here
up, it appears to be like good. I have bookmarked it in my google
bookmarks.
Hello there, just changed into alert to your weblog through Google, and
found that it's truly informative. I'm going to be careful for brussels.
I will be grateful in case you proceed this in future.
Numerous people will likely be benefited out of your writing.
Cheers!

I read this article completely regarding the difference of
most recent and previous technologies, it's awesome article.

Feel free to surf to my webpage :: http://www.thatsmelbourne.net.au/