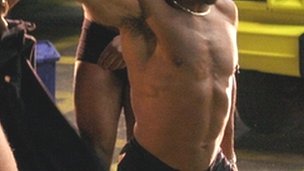 A male teacher who moonlighted as a stripper has been found guilty of unacceptable professional conduct but left free to continue teaching.
A disciplinary committee heard that Benedict Garrett also appeared in porn films and worked as a naked butler, while teaching at a London school.
Mr Garrett, 31, was given a reprimand after the hearing in front of the General Teaching Council (GTC).
The council heard he was working at Beal High School in Ilford at the time.
Mr Garrett was employed as head of personal, social and health education at the school between 1 January 2008 and 16 July 2010.
In June 2010, teachers and students at the school reported finding a trailer for an adult film featuring Mr Garrett.
Johnny Anglais
There was also concern that Mr Garrett communicated with a number of students via text message, email and Facebook.
The school deemed this inappropriate because it fell outside the boundaries of the professional teacher/student relationship.
An investigation was launched by the school into the allegations against Mr Garrett.
Mr Garrett, who uses the pseudonym Johnny Anglais, had admitted working in the adult industry but argued that it did not amount to unacceptable professional conduct since none of his behaviour was illegal.
Derek Johns, chairman of the GTC panel, told Mr Garrett that the committee was content that he would not repeat this behaviour should he resume teaching.
He added: "Therefore, in relation to risk of repetition, the committee considers it is unlikely that you will seek to return to the teaching profession whilst working as a stripper or in pornographic films."
The reprimand will remain registered for two years.
at August 31, 2011