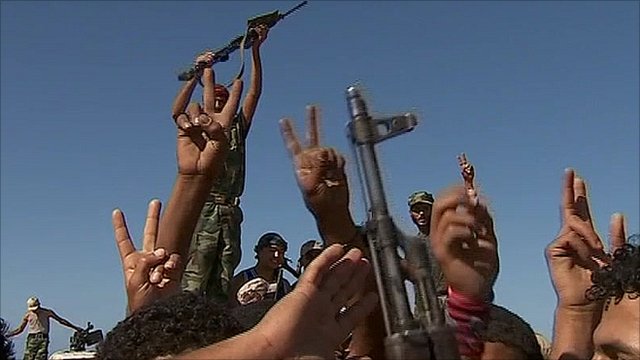 Libya's interim leaders have given pro-Gaddafi forces until Saturday to surrender or face military force.
Mustafa Abdul Jalil, who leads the National Transitional Council (NTC), said the ultimatum applied to loyalists of Col Muammar Gaddafi in his hometown of Sirte and in other towns.
The announcement came after Col Gaddafi's wife and three of his adult children fled to neighbouring Algeria.
Algeria has defended the move, which the NTC called an "act of aggression".
Col Gaddafi's own whereabouts are unknown - rumours have variously placed him in Sirte, in regime-controlled Bani Walid south-east of Tripoli, and in the capital itself.

Jeremy Bowen BBC Middle East editor, Tripoli
The anti-Gaddafi forces are suggesting they will move in with all the force at their disposal if they don't get what they want by the weekend.
If they are thinking about nation building for the future, they might be hoping for some kind of negotiated way out, because a big, bloody battle to end all this is not something they will want. If they want to build a new Libya, then the former pro-Gaddafi and anti-Gaddafi people are going to have to find a way to live together.
The infrastructure has not been that badly damaged here in Tripoli. Water is quite a serious problem but they do have electricity and people are getting things back on their feet. But there is an utter vacuum at the top in terms of power. Big decisions have to be taken because it won't be easy reconciling all the forces in the country. Such a political leadership has not yet emerged and that is a major and urgent challenge.

The anti-Gaddafi forces are trying to overcome pockets of resistance by loyalists, and preparing to advance on Sirte.
Speaking at a news conference in Benghazi, Mr Jalil said that if there was no "peaceful indication" by Saturday that Gaddafi-loyalists intended to surrender, "we will decide this manner militarily".
"We do not wish to do so but we cannot wait longer," he said.
The NTC's military chief, Col Ahmed Omar Bani, said: "Zero hour is quickly approaching... So far we have been given no indication of a peaceful surrender."
UK Foreign Secretary William Hague welcomed the deadline, saying: "I think it's the right thing to do, to say to the forces loyal to the remnants of the Gaddafi regime: here is the opportunity to lay down your arms, to consider your situation."
Mr Jalil said he had spoken to Nato officials and that the NTC had decided no foreign troops were needed in Libya to maintain security.
"We are betting on our youths and we are certain our bet will pay off," he said.
But Mr Jalil warned that Col Gaddafi was "not finished yet".
"The danger that is threatening the revolution and the Libyan people still exists. Gaddafi has support and partisans" inside and outside Libya, he said.
Another military commander on the NTC, Col Hisham Buhagiar, told Reuters news agency that 50,000 people were now thought to have been killed since the start of the uprising six months ago.
Nato 'committed'
The anti-Gaddafi forces made an attempt to reach Sirte last week but were fought back by loyalist troops. On Monday, fighters coming from Benghazi in the east captured the small town of Nofilia, on the road to Sirte.
The BBC's Jon Leyne in Benghazi says the anti-Gaddafi forces have mainly been negotiating with tribal leaders both in Sirte and the other two main remaining Gaddafi strongholds of Bani Walid and Sabha, deep in the Sahara desert region. 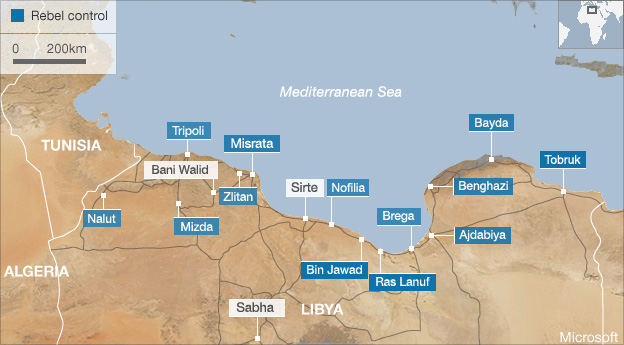 While they have had some success with the tribal leaders there has been little response from regime loyalists, says our correspondent, and there are fears that a military assault on Sirte could be a lengthy and bloody battle.
In a news briefing on Tuesday, Nato spokesman Col Roland Lavoie said there had been "dialogues in several villages" that had been freed with "minimal hostilities" and he hoped the same might apply to Sirte.
Col Lavoie said Col Gaddafi's regime was "rapidly losing control on multiple fronts" and that the Tripoli region was "essentially freed".
However, he said Col Gaddafi was "displaying a capability to exercise some level of command and control" and that Nato was still "very much involved" in military action.
"We remain fully committed to our mission and to keeping the pressure on the remnants of the Gaddafi regime until we can confidently say that the civilian population of Libya is no longer threatened," he said.
'Hospitality'
Algeria said Col Gaddafi's wife Safia, daughter Aisha and sons Muhammad and Hannibal crossed the border between Libya and Algeria at 0845 local time (0745 GMT) on Monday.

(L-R) Hannibal, Muhammad and Aisha Gaddafi have crossed into Algeria
The Algerian government later said Aisha Gaddafi had given birth to a daughter shortly after arriving in the country.
The NTC has condemned Algeria, which has not yet officially recognised the council, for offering shelter to the family, calling it "an act of aggression".
Our correspondent says Mr Jalil softened the tone on Tuesday, saying he believed Algeria would not host the family for long before they left for a third country.
Algeria's ambassador to the UN, Mourad Benmehidi, told the BBC earlier that in the desert regions there was a "holy rule of hospitality" and his country had accepted the family on humanitarian grounds. 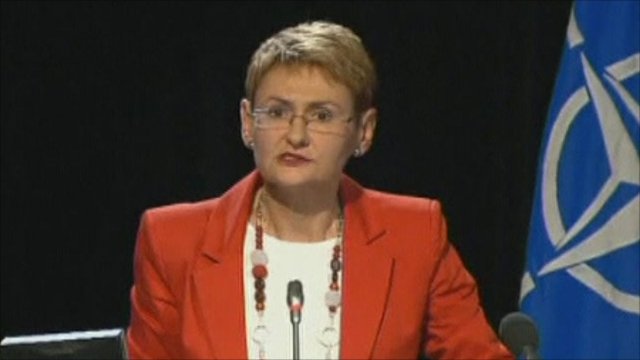 Click to play
Spokesperson Oana Lungescu: "Nato still has a job to do in Libya"
Meanwhile, more details have emerged about recent mass killings in Libya.
According to the NTC's Justice Minister Mohammed al-Alagi, four mass graves have been discovered across the country - including one at Ain Zara in south-east Tripoli, behind the barracks of the so-called Khamis Brigade, whose commander was Col Gaddafi's son, Khamis.
Some rebel sources have said Khamis was killed on Saturday. However, the anti-Gaddafi forces have claimed his death before and on Tuesday, Col Lavoie said Nato had no word of Khamis's fate.
Meanwhile Zimbabwe, whose President Robert Mugabe is a strong ally of Col Gaddafi, expelled the Libyan ambassador and his staff on Tuesday after they recognised the interim National Transitional Council.
at August 30, 2011