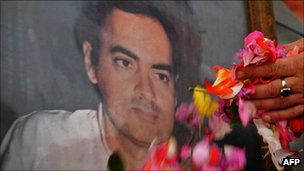 A court in southern India has stayed the executions of three men convicted of plotting the 1991 assassination of former Prime Minister Rajiv Gandhi.
The men were to have been hanged at a jail in Tamil Nadu on 9 September but that has now been put back eight weeks.
India's president rejected a plea for mercy this month. Lawyers for the men say the time taken to decide the plea - 11 years - was unconstitutional.
The killing of Rajiv Gandhi by a Tamil Tiger suicide bomber shocked India.
The three men - Murugan, Santhan and Perarivalan - were all members of the separatist rebels, who were defeated by Sri Lankan troops in 2009. The first two are from Sri Lanka, the third is an Indian Tamil.
Gandhi's killing was widely seen as retaliation for his having sent Indian peacekeepers to Sri Lanka in 1987 when he was prime minister.
For years the rebels denied killing Mr Gandhi but expressed "regret" for his murder in 2006.
Nalini Sriharan, an Indian Tamil married to Murugan, was also convicted in connection with the assassination but her death sentence was commuted to life in jail in 1999.
Appeals
The execution order has caused much concern in Tamil Nadu, where there is growing political pressure to have the men's sentences commuted to life in jail.
After further appeals on Tuesday, the Madras High Court said it had "stayed the execution of the capital punishment by eight weeks".
The court has asked the federal government to respond to the petition from the condemned men's lawyers within that time.
The BBC's Sanjoy Majumder in Delhi says there is little chance legally of the plea being accepted.
But Tamil politicians say there is tremendous sympathy for the three men who have spent more time in prison than they would have if they had been given life imprisonment, which is a 14-year jail sentence in India.
Meanwhile, the Tamil Nadu state assembly has unanimously backed a resolution calling for the death sentences to be commuted to life imprisonment.
Chief Minister J Jayalalitha said the resolution "took into consideration the overwhelming sentiment of the people of Tamil Nadu" who wanted the men's lives spared.
On Monday, Ms Jayalalitha appealed to the public "not to act on impulse" after a woman killed herself by setting herself on fire demanding that the three men be saved.
The leader of the state's opposition DMK party, M Karunanidhi, also appealed to the federal and state governments to spare the men's lives.
The death penalty is rare in India. The last execution was in 2004 when a 41-year-old former security guard was hanged for the rape and murder of a 14-year-old schoolgirl.
at August 30, 2011