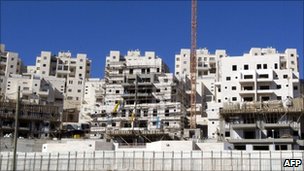 The Israeli army has said it is training Jewish settlers in the West Bank to repel violent protest.
The move comes ahead of anticipated protests by Palestinians when they make a bid for separate statehood at the United Nations in September.
The campaign for recognition is opposed by Israel and officials fear the bid could revive violence.
Settler officials denied a newspaper report that suggested settlers would be equipped with tear gas.
Haaretz said the military had been training settlement security chiefs and their teams and giving them tear gas and stun grenades.
In a written statement, the Israeli army said it was "devoting great efforts to training local forces and preparing them to deal with any possible scenario".
Stalled talks
Drills among dozens of civil defence teams have reportedly been stepped up and the Israeli military is being prepared for possible violent protests too.
According to Reuters, scenarios include protesters reaching the gates of settlements and possible confrontations.
Israel has long permitted settlers to carry weapons but Jewish settler groups have insisted any use of firearms would be for defensive purposes only.
"Certainly during a period of tension, with intelligence reports of possible threats, of course readiness crews are being trained," Danny Dayan, chairman of the settlers' Yesha Council told Reuters in a telephone interview.
He said that armed settlers operated under Israeli army orders to avoid killing civilians.
Palestinians and human rights groups say settlers have used weapons to attack Palestinians and that Israel has been lax in investigating such incidents.
The President of the Palestinian Authority, Mahmoud Abbas, has said that September's debate on Palestinian statehood at the UN General Assembly will put pressure on Israel to negotiate a final peace deal, but Israel says it will have the opposite effect.
Direct talks between the Palestinians and Israelis are currently stalled over the Palestinian refusal to take part while the Israeli government continues to build settlements in the West Bank.
The settlements are considered illegal under international law, though Israel disputes this. Israel has occupied the West Bank since 1967, and annexed East Jerusalem, a move not recognised by the international community.
More than 500,000 Jewish settlers live in the West Bank, including East Jerusalem, among a Palestinian population of about 2.5 million.