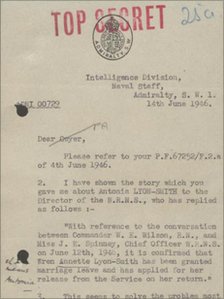 Intelligence officers suspected a teenage daughter of a British brigadier was a German officer's mistress during World War II, National Archives files show.
Antonia Lyon-Smith was interned by the Germans in 1940 when she was 15 and living in France, but released due to her youth.
She was taken in by a Gestapo officer and another Nazi wanted to marry her.
MI5 suspected she had betrayed her knowledge of the Resistance.
The previously-secret files said Antonia was the daughter of Royal Artillery officer Brigadier Tristram Lyon-Smith and a Canadian mother.
A Nazi officer called Karl Gagel initially tried to claim there was no intimate relationship between the teenager and himself, but "there was nevertheless an understanding that when Germany and Britain ceased to be enemies they would become engaged," the file shows.
Antonia revealed in her 1982 autobiography Little Resistance: A Teenage English Girl's Adventures In Occupied France that she had kissed the officer but was never engaged to him.
She had tried unsuccessfully to flee France for Switzerland, but eventually gave up. 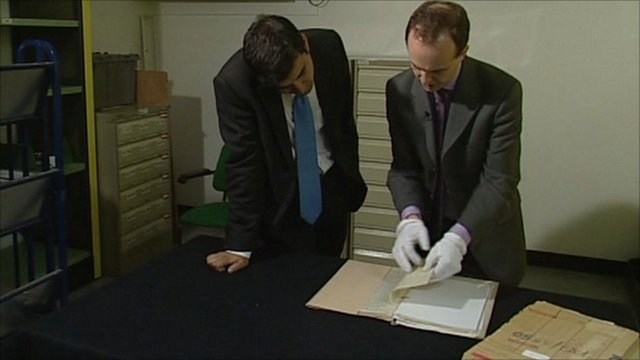 Click to play
Ed Hampshire, from the National Archives: "She had various liaisons with Gestapo officers"
In December 1942, she had been asked to write a letter of introduction for a friend of Claude Spaak, the brother of the Belgian foreign minister.
She later told MI5 that she had no idea Mr Spaak was heavily involved in the Resistance.
The Nazis intercepted the letter, and she was interrogated in Paris by senior Gestapo officer Heinz Pannwitz.
She claimed she was held in Paris in solitary confinement from October 1943 until January 1944, when she was allowed to leave and stay with her cousin.
But her MI5 file includes a report from a Nazi source suggesting that she enjoyed "comparative freedom as a species of office girl" for Pannwitz.
It added that she "did little but make tea, sew and listen to radio", and even went on shopping expeditions with Gagel.
During interrogation by MI5 she did not disclose anything about her relationship with Gagel - which led the British intelligence officer to conclude that she was his mistress and "almost certainly" betrayed all her knowledge of a Resistance group to the Germans.
Letter to father
Continue reading the main story

Brig Tristram Lyon-Smith
Gagel's feelings for Antonia were discovered after her irate father received a letter from Gagel via his bank branch in East Sussex.
The former Gestapo officer wrote to the bank in October 1945: "I should be much obliged if you would kindly inform Miss Antonia Lyon-Smith that I shall be in Germany for some time to come, and that I should like to have news of her."
An MI5 officer who interviewed Brig Lyon-Smith about his daughter noted: "She was apparently 'befriended' by Karl Gagel, who ostensibly arranged that she should not be sent to Fresnes prison in return for her undertaking to marry him when the war was over.
"Antonia has not the slightest intention of ever seeing Karl again if she can possibly avoid it."
Her own account, given in 1946, of her time with the Gestapo was described as "rather disconnected" and "not satisfactory" by an MI5 officer.
At first the MI5 officer concluded: "It is clear to me that she was holding back on this matter [of Gagel], though whether simply because her association with him was a disreputable one or not, I cannot say."
But after further research, the officer wrote in April 1946: "My own view is that she certainly became Karl Gagel's mistress and almost certainly disclosed to the Germans all her knowledge of the Spaak organisation, which I believe to have been considerably greater than she admits."
He even raised concerns two months later about whether Miss Lyon-Smith was suitable to continue working for the Women's Royal Naval Service, but Royal Navy intelligence considered her not to be a risk as as she was about to marry.
Her autobiography, published under her name from her second marriage, Antonia Hunt, was released in 1982, more than two decades before her death. In it, she mentions a surprise visit from the comic author PG Wodehouse when she was seriously ill while in Gestapo custody in Paris.
National Archives have also released files about Wodehouse's activities while in an internment camp.
The documents show that MI5 doubted his account of how he came to make broadcasts for the Nazis in the summer of 1941.
at August 26, 2011