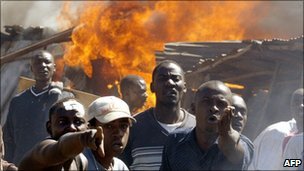 Some 1,200 people were killed in violence after the 2007 elections
Continue reading the main story

The International Criminal Court has rejected an appeal by Kenya's government to stop it putting on trial six people accused of links to 2008 post-election violence.
The six include the deputy prime minister, two former ministers and an ex-police chief.
They are accused of murder, deportations and persecutions by ICC chief prosecutor Luis Moreno-Ocampo.
Some 1,200 died and more than 500,000 fled their homes in the violence.
The case is now due to open on Thursday.
In the peace deal that followed in early 2008 it was agreed that those accused of crimes would face justice in Kenya or at the ICC in The Hague.
After Kenyan MPs blocked moves to set up a local tribunal, the ICC's chief prosecutor named the six high-profile Kenyans in December 2010.
Eight months on, Kenya's government failed to convince a majority of the ICC judges that it had now started its own investigations into the violence.
One judge did, however, side with Kenya in its last-ditch effort to get the case abandoned.

BBC East Africa correspondent Will Ross says the Kenyan judiciary is being reformed but most Kenyans still prefer the ICC option as people simply do not believe these senior politicians would face a fair trial at home.
The accused were all senior allies of President Mwai Kibaki or his election rival Raila Odinga, now prime minister.
However, one of the accused - former Higher Education Minister William Ruto - has since fallen out with Mr Odinga and says he will contest presidential elections due next year.
He was sacked last week.
Henry Kosgey - another former minister - and radio executive Joshua Arap Sang are also accused of organising attacks on supporters of Mr Kibaki, especially in the Rift Valley.
Deputy Prime Minister Uhuru Kenyatta, head of the Civil Service Francis Muthaura and former police chief Mohammed Hussein Ali are accused of mobilising pro-Kibaki militias to attack people seen as supporters of Mr Odinga.
Kenya's government has been lobbying for the cases to be dropped - a position endorsed in February by the African Union.
at August 31, 2011