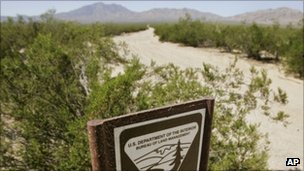 California is experiencing a heat-wave with higher than average temperatures
Two European tourists have been identified as the couple found dead in a desert park in California.
The bodies of Dutch music promoter Augustinus Van Hove and his girlfriend, Helena Nuellett, were found dead in the Joshua Tree National Park on Monday.
Officials said that the couple had probably died from heat exposure as temperatures soared.
The pair had driven into the park shortly before midday on Monday, taking a remote dirt road towards Arizona.
"It doesn't take long to go from being in trouble to being in a life-threatening situation," said park spokesman Joe Zarki.
"Heat exhaustion or heat stroke could happen very quickly, your brain and body malfunctions seriously."
He said the road had signs warning drivers it should only be used by four-wheel-drive vehicles.
The area is currently experiencing a heat-wave and temperatures in the remote park reached 41C (106F) on Monday.
Seven hours after entering the park, a couple found the body of Mr Van Hove on the edge of Black Eagle Mine Road.
The body of 38-year-old Ms Nuellett, from Germany, was found about a mile away, while the vehicle they had rented was found a further five miles (8km) on the same road.
The Joshua Tree National Park sprawls over more than 1,200 sq miles (3,100 sq km) of the rugged Colorado and Mojave deserts and attracts about 1.4m visitors a year.
at August 26, 2011