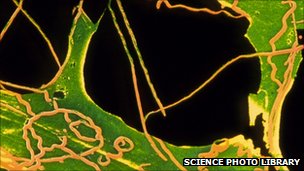 At least 83 Guatemalans are thought to have died after being deliberately infected with syphilis and gonorrhoea in the 1940s, a presidential commission in the United States has heard.
US government scientists infected hundreds of Guatemalan prisoners, psychiatric patients and orphans to study the effects of penicillin.
None of those infected consented.
The head of the commission, Amy Gutmann, called the research a "shameful piece of medical history".
The Presidential Commission for the study of Bioethical Issues is due to publish its report in September.
President Obama set up the commission when the research came to light last year.
He also apologised to his Guatemalan counterpart, Alvaro Colom, saying the acts ran contrary to American values.
Earlier this year, a group of Guatemalans who were infected and their relatives announced that they were suing the US government over the affair.
at August 29, 2011