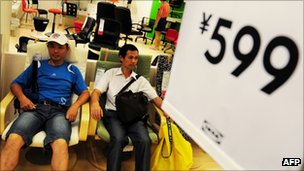 The charitable arm of the furniture giant Ikea is donating $62m (£38m) over the next three years for people in the Dadaab refugee camp in Kenya.
The funds will go through the UN refugee agency, which said it was the largest private donation it had received in its 60-year history.
Dadaab, which mainly houses Somalis, is the biggest refugee camp in the world.
Its population has swollen by 150,000 in past months, following drought and famine in the Horn of Africa.
It now holds some 440,000 people, despite only being designed for 90,000.
The money from the Ikea Foundation will be used to expand emergency relief and assist up to 120,000 people, said the UNHCR.
"This humanitarian gesture by the Ikea Foundation comes at a critical time," said Antonio Guterres, UN High Commissioner for Refugees.
"The crisis in the Horn of Africa continues to deepen with thousands of people fleeing Somalia every week. We are extremely grateful. Help like this can't come a moment too soon."
A spokesman said said the UN had examined the donation with "due diligence" before it was accepted, news agency AP reported.
'Bold'
The UN says tens of thousands of people have already died in Somalia alone, and some 3.2m others are thought to be on the brink of starvation.
In a statement, chief executive officer of the Ikea Foundation Per Heggenes said the donation was a "bold but natural extension of Ikea Foundation's longstanding commitment to making a better everyday life for children and families in need throughout the developing world".
Ikea spokesman Jonathan Spanpinata told the BBC that the donations would not include any flatpack furniture - though it has previously sent mattresses and duvets to Tunisian refugees.
The furniture chain is the world's largest and published financial results for the first time last year, showing that total sales were 23.1bn euros ($31.7bn; £20bn) for the year ending in August.
at August 30, 2011