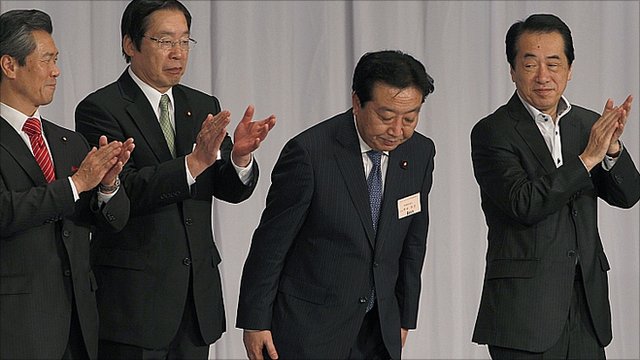 Japan's governing Democratic Party (DPJ) has chosen Finance Minister Yoshihiko Noda as its leader, lining him up to become the country's sixth prime minister in five years.
Mr Noda secured victory in a run-off against Trade Minister Banri Kaieda, after a first-round vote in which no candidate won a clear majority.
Prime Minister Naoto Kan announced his resignation on Friday.
He has been criticised for his handling of the quake aftermath.
Mr Noda, 54, is expected to be confirmed by parliament as prime minister on Tuesday.
He secured 215 votes in the ballot against Mr Kaieda's 177 votes.
Supporters of public favourite Seiji Maehara - the former foreign minister who was eliminated in first-round voting - threw their support behind Mr Noda in the second ballot.
Mr Kaieda was backed by scandal-hit party heavyweight Ichiro Ozawa, who controls the DPJ's biggest faction.
Divided party Correspondents say the new prime minister will face a daunting agenda, including trying to unify a divided party.

Large parts of Japan need to be rebuilt after March's earthquake and tsunami, and the crisis at the crippled Fukushima nuclear power plant still needs to be resolved.
Added to that, Mr Noda, a fiscal conservative, will need to address Japan's stagnant economy.
He has said in the past that he favours raising funds through increased taxation - including a doubling of Japan's sales tax, which currently stands at 5% - to cut debt and meet social security commitments.
Unlike Mr Kan, he wants Japan's halted nuclear reactors to be restarted and has not backed his call for a nuclear-free Japan.
"Let us sweat together for the sake of the people," he said after the vote. "This is my heartfelt wish."

The DPJ won power in a general election in 2008, ending half a century of almost unbroken rule by the Liberal Democratic Party.
But it lost control of the upper house in polls in 2010 and has struggled to pass key legislation through parliament.
It has also been hit by in-fighting, with the leadership race turning into a bitter factional battle between supporters and enemies of tainted king-maker Ichiro Ozawa.
Mr Ozawa - who is known as the Shadow Shogun - commands the loyalty of around 130 lawmakers, despite awaiting trial on charges of misreporting political donations. He is currently suspended from the DPJ.
The public's favourite candidate, Mr Maehara, would have become Japan's youngest leader since World War II if elected.
Farm Minister Michihiko Kano and former Transport Minister Sumio Mabuchi were also in the leadership contest.
at August 29, 2011