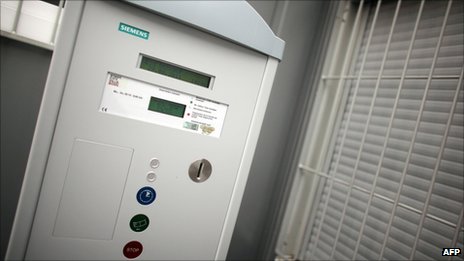 The prostitution meter is said to be the first of its kind
The German city of Bonn has installed a meter to tax prostitutes for soliciting on its streets at a rate of six euros (£5.30; $8.70) per night.
Those who fail to pay face fines or even a ban, and 264 euros were found in the meter when it was first emptied, according to AFP news agency.
Tax has been levied on prostitutes elsewhere but Bonn is the first city to use a meter, a spokeswoman said.
But a prostitutes' rights activist said the scheme amounted to double taxation.
Prostitutes are expected to pay the flat rate, regardless of earnings.
The machine, which looks like an ordinary parking meter, has been installed in an industrial area near the city centre which favoured by prostitutes and their clients.
'Consummation areas'
Isabelle Klotz, a spokeswoman for the city, said they expected to get about 200,000 euros per year from the meter. 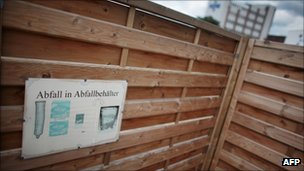 The "consummation areas" are wooden cubicles designed to screen cars
"Women who work in brothels also pay the tax but until now it had been difficult to get women on the street to pay," she added.
"Thanks to this new method we will be able to tax them in all fairness with the others."
There are believed to be about 200 prostitutes in Bonn.
Juanita Rosina Henning, from the Dona Carmen prostitute support group, demanded the meter's removal, saying prostitutes already paid income tax.
"This has nothing to do with fiscal equality," she said.
City officials have restricted the prostitutes' areas of operation to specific quarters but critics say this has made it easier for prostitutes to ply their trade, Reuters news agency reports.
Bonn has also erected "consummation areas", or wooden garages clients may use to visit prostitutes.
at August 31, 2011