Strauss-Kahn gets passport back after US case dropped 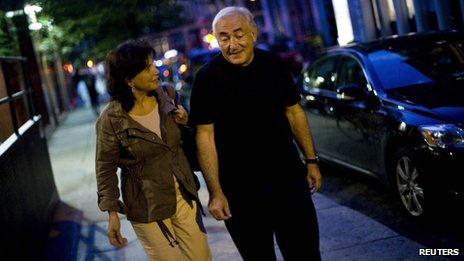 Former IMF director Dominique Strauss-Kahn has been given back his passport after sexual assault charges against him were dropped in New York this week.
Mr Strauss-Kahn, 62, has said he cannot cannot wait to return to France but he is expected first to visit Washington.
He had been confined to New York since May, when hotel maid Nafissatou Diallo accused him of sexual assault.
Opinion polls in his native France suggest his political prospects there have been badly damaged.
Before the affair, he had been seen as a likely candidate for the Socialist opposition to field in next year's French presidential election.
With the return of his passport, he is now able to travel to France, the BBC's Michelle Fleury reports from New York. Whether he returns to public life is less clear, she adds.
'Personal visit' A judge dropped the charges at the request of prosecutors amid concerns about Ms Diallo's credibility.

Like any former managing director of the IMF, Mr Strauss-Kahn will be welcomed to the fund”

David Hawley IMF spokesman
The prosecutors had concluded a jury would not believe Ms Diallo's claim of sexual assault because the immigrant from Guinea lied repeatedly to investigators, including about another alleged rape as part of an asylum claim.
With DNA evidence indicating a sexual encounter did occur between the two in a suite at the Sofitel Hotel in May, Mr Strauss-Kahn's lawyers maintain it was consensual and prosecutors were unable to determine whether force had been used.
Ms Diallo has also filed a civil suit.
Mr Strauss-Kahn's lawyers have not divulged their client's next move, the Associated Press news agency reports.
However, the IMF has said he plans to visit its headquarters in Washington, where he also has a home, as early as next week.
Mr Strauss-Kahn resigned from his IMF post days after his arrest, saying he wanted to focus on clearing his name.
IMF spokesman David Hawley would not say why Mr Strauss-Kahn planned to visit but it is thought he may want to say farewell to former colleagues.
"Like any former managing director of the IMF, Mr Strauss-Kahn will be welcomed to the fund," Mr Hawley told reporters.
"I understand he intends to make a personal visit to headquarters."
Poll rejection Mr Strauss-Kahn's place as IMF director was taken by another French politician, Christine Lagarde, who was finance minister in France's centre-right government.
His own Socialist party is preparing for primaries to choose its runner for the 2012 vote, in which President Nicolas Sarkozy may stand for re-election.
The primaries list was drawn up after the former IMF chief's arrest and he is not on the candidate list.
An opinion poll taken this week suggests four out of five French people, across the political divide, believe Mr Strauss-Kahn should keep out of the Socialist race.
Only a slight majority of Socialist voters would favour him taking a seat in an eventual Socialist-led government, according to the BVA poll, published in France's Metro newspaper.
The poll, which sampled opinion among 1,026 adults, was taken on Tuesday - the day the charges against Mr Strauss-Kahn were dropped - and Wednesday.
An opinion poll by Ipsos carried out a few days before had suggested 61% of French people took an unfavourable view of the former IMF chief.
at August 26, 2011