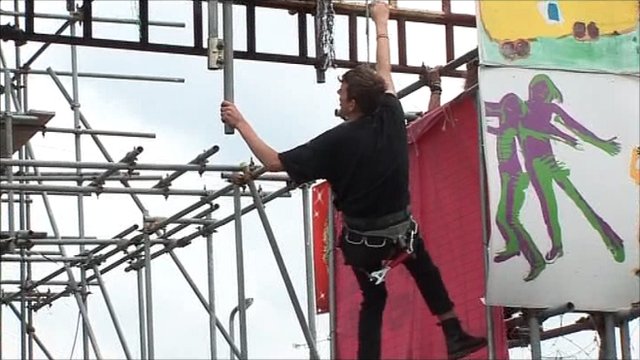 A last ditch attempt to prevent the eviction of families from the largest unauthorised traveller site in England has failed at the High Court.
Severely ill traveller Mary Flynn, 72, who lives at Dale Farm near Basildon, applied for an injunction to stop her eviction from the site where 80 families live.
Mrs Flynn suffers breathing problems and also uses an electric nebuliser.
But the case was rejected by judges at the High Court on Wednesday afternoon.
Basildon Borough Council gave a legal undertaking to review fresh medical evidence relating to 72-year-old Mary Flynn before proceeding against her.
From midnight, an order comes into force meaning Basildon Council will have legal powers to begin the evictions.
'Criminal conduct'
Supporters of the travellers, including actress Vanessa Redgrave, listened as counsel Michael Paget said European law required that, where someone's home or home life was being interfered with, there should be an independent consideration by the courts of whether the action was proportionate.
He said Mrs Flynn, who has lived at the site for eight years, was very sick and there was medical evidence to show that her situation was highly relevant to any balancing exercise.
He said: "We accept that it is lawful to bring an enforcement procedure against us under English and Welsh national law and we accept that our Article 8 rights (which affect private and family life) have been considered by the local planning authority. 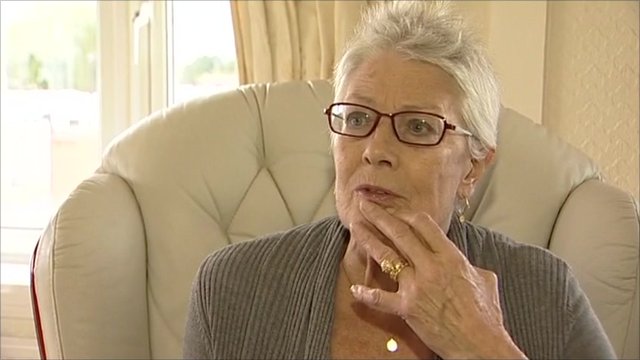 Click to play
Vanessa Redgrave: 'Dale Farm residents have not flouted the law"
"But no judge has determined whether it is proportionate to use this process to evict Mrs Flynn from her plot."
Reuben Taylor, for Basildon Council, told the judge that Dale Farm was the largest unauthorised travellers site in the UK and was in the Metropolitan green belt where strict planning procedures applied to prevent development.
He said Mrs Flynn, who has been subject to an enforcement notice since October 2003, had been committing a criminal offence for nearly eight years and was effectively seeking an injunction to enable her to continue to flout the law.
He added: "In my submission the court should be very slow indeed to sanction criminal conduct in this way."
It was the council's case that an injunction was not justified as the claim was unarguable and an abuse of process and there had already been a clear consideration of Article 8 and proportionality.
Although the deadline for residents to leave voluntarily expires at midnight on Wednesday, forced evictions are expected to follow next month.
Families at the former scrapyard own their land but many do not have planning permission for homes, despite repeated applications.
'Put up fight'
Although supporters are hopeful a peaceful solution can be found, residents believe the eviction could become confrontational.
Mother-of-two Mary O'Brien, who has lived on the site for 10 years, said: "If they come in with bulldozers we will put up a fight.

We bought and paid for this land ourself. We are not squatting on it and we've done everything by the book”

End Quote Marianne McCarthy Resident
"All this will do is move us 50 yards down the road and it will be a huge waste of public money."
Two bishops and actress Vanessa Redgrave visited the site on Tuesday to support the residents.
Bishop of Chelmsford Stephen Cottrell and Catholic Bishop of Brentwood Thomas McMahon went on a pastoral visit and pleaded with authorities to think again about the eviction.
Bishop McMahon said it was a "humanitarian" problem.
"We cannot condone unruly and bad and inexcusable behaviour, I would not want to condone that," he said.
"But at the same time, one met real people, with real problems and emotions and stress, because of the forthcoming eviction and facing nowhere to go."
He called for more authorised sites and said: "They just do not seem to be available."
Long-term resident Marianne McCarthy said a whole community would be destroyed.
"I think it's just scandalous the way that we're getting treated," she said. 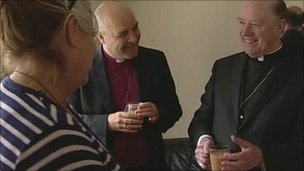 The Right Reverend Stephen Cottrell and Right Reverend Thomas McMahon met residents
"To put all young children out of the school, out on the road with no education whatsoever, no healthcare, no water, no facilities. I mean, this is not fair.
"We bought and paid for this land ourself. We are not squatting on it and we've done everything by the book and this is the outcome of it today."
Actress and human rights campaigner Vanessa Redgrave took time off filming Song for Marion to visit the site and said "lives will be ruined" if the planned eviction goes ahead.
The Oscar-winning actress and UN ambassador said: "The whole situation is really about planning - there's no crime that has been committed.
"Evicting these families would be totally unreasonable and irresponsible."
at August 31, 2011