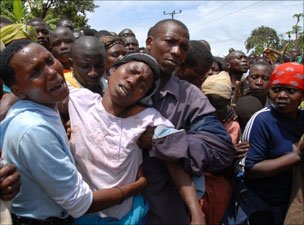 At least 24 people have died after torrential rains triggered landslides in eastern Uganda, Red Cross workers say.
Residents fear 35 people may have been killed in Bulambuli district, but only 24 bodies have been recovered so far.
The village of Namwidisi has reportedly been completely submerged in mud.
Last year, hundreds died in a similar incident nearby. Officials said then they would relocate up to half a million people to avoid any repeat.
However, following some local opposition to the plans only a few thousand - those deemed most at risk - were actually moved.
The Minister of State for Relief Disaster Preparedness, Musa Ecweru, said the government planned to push ahead with relocations to avoid more deaths.
"The government plans to procure land every year to relocate people who find themselves in this kind of situation," Mr Ecweru said.
Red Cross workers and villagers are digging in the mud hoping to find survivors and retrieve bodies in the area 270km (167 miles) north-east of the capital, Kampala.

A local chief, his wife and all of his eight children were killed, reported the Daily Monitor, a leading independent Ugandan newspaper.
Several roads in the region have been cut after heavy rains over the past month.
Following last year's disaster on the slopes of Mount Elgon, it was said that rapid population growth had led people to cut down trees on the mountains, making mudslides and flooding more common.
at August 29, 2011