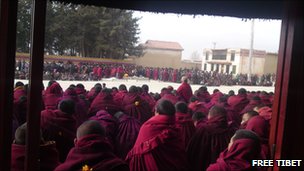 Image from Free Tibet of funeral at Kirti monastery on 19 March for Phuntsog, who set himself on fire
Continue reading the main story

A Chinese court has sentenced two Tibetan monks to prison over the death of a fellow monk who set himself on fire in an apparent protest.
Chinese authorities say the man, Rigzin Phuntsog of the Kirti monastery, immolated himself on 16 March.
Tsering Tenzin and Tenchum will be jailed for 13 and 10 years respectively for "intentional homicide", Xinhua news agency said.
On Monday, the court jailed another monk for 11 years over the death.
Drongdru, Phuntsog's uncle, is accused of hiding him after he set himself on fire and depriving him of medical attention for 11 hours. The exact circumstances surrounding the monk's death remain unclear.
The latest verdicts come as the US questioned whether China had followed its own legal standards in the case.
"We urge Chinese leaders to address policies in Tibetan areas that have created tension and to protect Tibetans' unique linguistic, cultural and religious identity," a state department statement said.
Crackdown
The incident happened in March in Sichuan province's Aba county, where there is a large ethnic Tibetan community.
There is disagreement about how the monk died.

At the time, Tibetan rights groups reported that witnesses saw police put out the flames, then begin beating the monk, at which point monks and local people took him to the monastery before taking him to hospital some hours later.
After Phuntsog's death protests were then reported in the area around the monastery, followed by a heavy security presence.
Rights groups accused the government of shutting the monks in the monastery and forcing them to take part in compulsory "patriotic education".
In March 2008, Tibet witnessed a wave of violent anti-China protests - its worst unrest in 20 years.
China responded to the unrest with a military crackdown, including in areas like Aba which are outside Tibet but have a large ethnic Tibetan population.

Many Tibetans have complained about the growing domination of China's majority Han population in Tibet and accuse the government of trying to dilute their culture.
But China says it has invested heavily in Tibet and has generated significant improvements in people's living standards.
There have been a number of incidents of monks setting themselves on fire to protest against Beijing's rule.
Earlier this month, a 29-year-old Tibetan monk burned himself to death in another town Sichuan.
Activists said the monk, whom they named as Tsewang Norbu, had shouted slogans including "We Tibetan people want freedom" and "Long live the Dalai Lama" before setting himself alight.
at August 31, 2011