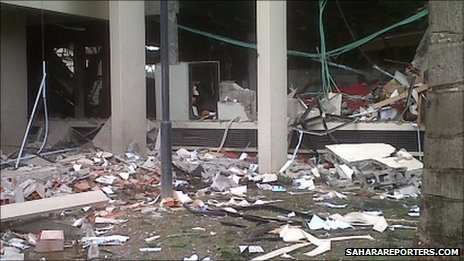 There has been a bomb attack at the UN building in the Nigerian capital Abuja, the United Nations says.
The BBC's Bashir Sa'ad Abdullahi, who is at the site of the explosion, says the ground floor of the building has been badly damaged.
The emergency services are removing dead bodies from the building while a number of wounded are being rushed to hospital, our correspondent says.
Islamist militants have carried out recent attacks on the city.
A car bombing at police headquarters in June was blamed on Islamist sect Boko Haram, a group which wants the establishment of Sharia law in Nigeria.
There has been no claim of responsibility for Friday's attack, but government officials have blamed "terrorists" for the bombing, our correspondent says.
Eyewitnesses and an unnamed security source said a car bomb had exploded, but that detail is unconfirmed.
Friday's attack took place at about 1100 local time (1000 GMT) in the diplomatic zone in the centre of the city, close to the US embassy.
'Scattered bodies' 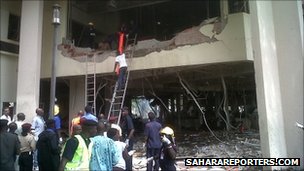 There have been no claims of responsibility so far
There was a loud explosion and smoke billowed from the building. The powerful blast shattered all the glass in the building, our correspondent says.
"I saw scattered bodies," Michael Ofilaje, a Unicef worker at the building, said according to AP news agency.
"Many people are dead."
He said it felt like "the blast came from the basement and shook the building".
Police have sealed off the area.
"We have deployed our policemen and anti-bomb squad. We can't establish how many casualties [there are]," an Abuja police spokesman said according to Associated Press news agency.