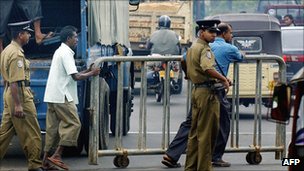 President Rajapaksa of Sri Lanka has announced the imminent lifting of the country's state of emergency.
The laws have been in place on and off since 1971 and were renewed by parliament every month - even after the end of the separatist war in 2009.
The BBC's Charles Haviland in Colombo says the laws are now almost certain to lapse early in September.
Mr Rajapaksa told parliament he was making the move because of the lack of militant attacks since the war ended.
However, our correspondent says an equally stringent Prevention of Terrorism Act will remain in place.
The president said he was "satisfied that there was no need to have the state of emergency any more".
"There has been no terrorist activities since the end of the war in May 2009," he said.
'Landmark change' "I am satisfied that an extension of emergency is not required any more. So I inform [the parliament] that we will not extend the emergency any more." 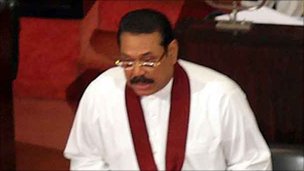 The president told parliament that emergency laws were no longer needed (Photo: Nalin Hewapathirana)
Attorney-General Mohan Peiris told the BBC that the emergency would be allowed to lapse on 9 September, "if not earlier".
He said this was a landmark change that would "make the air around us easier to breathe".
The laws gave security forces sweeping powers of arrest and detention.
They have been renewed with only intermittent breaks ever since they were first imposed.
Western governments and India had been urging an end to the emergency, arguing that its provisions made it easy for the government to detain people unfairly and silence anti-government activists.
The attorney-general said the process of releasing some prisoners would now be speeded up.
Reports say thousands of people are still held under the emergency rules.
at August 26, 2011