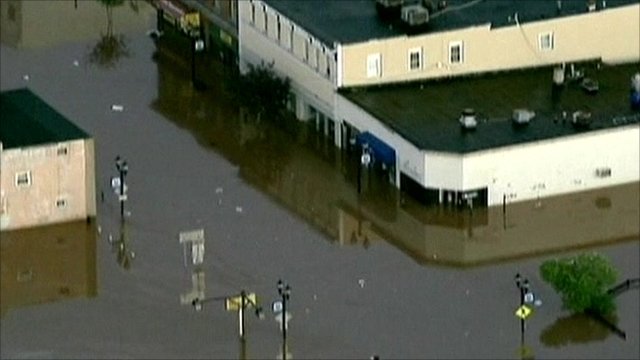 Tropical Storm Irene has killed 37 people, and authorities warn that flooding could continue for up to three days in northern US states.
More than five million people remain without power, while Vermont is reeling from its worst floods in many decades.
Insurance claims could top $7bn (£4.3bn), the Consumer Federation of America estimated.
The brunt of Irene's impact was felt by towns and suburbs from North Carolina to Vermont.
Driving rains and flood tides damaged homes and cut power to more than three million people in New Jersey, Connecticut and New York alone.
Further damage predicted The storm passed over the east coast at the weekend and has now moved over the border into Canada's north-eastern provinces. 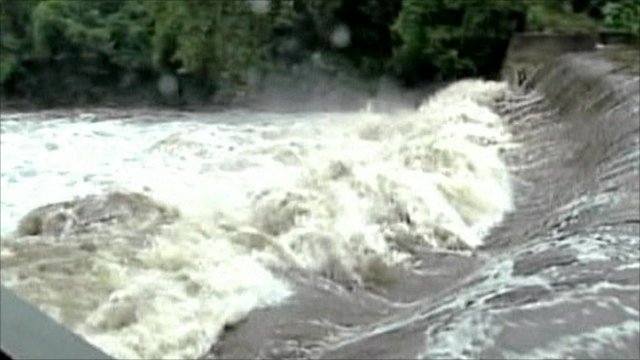 Click to play
Scott Snyder from the American Red Cross: "Some rivers are still rising"
US authorities have warned the impact of the storm will be felt for some time and that certain rivers had yet to crest, with further flooding expected over the next two to three days.
In New York, which escaped the worst of Irene's fury, transport resumed on Monday.
But Governor Andrew Cuomo said dozens of bridges and roadways would need to be repaired and that some of the state's rivers had yet to crest from flooding.
"You're going see more damage before it starts to get better," he told reporters.
The states south of New York, where Irene struck at hurricane-strength on Saturday and Sunday have begun the arduous task of cleaning up, assessing the damage and counting the dead.
Vermont lashed In the rural state of Vermont, the last hit before Irene passed into Canada, the storm washed away bridges and swamped the town of Brattleboro.

Touring the town, Governor Peter Shumlin criticised media coverage for focusing on New York, saying: "We're not Manhattan, but we have human lives here in Vermont, too."
Authorities asked people to avoid travelling in the state, and warned of significant flooding, damaged roads and downed power lines.
The storm caused a section of a ski lodge to collapse in the town of Killington, where as many as 300 people were stranded on Monday.
Connecticut Governor Daniel Malloy said on Monday that in his state more homes were without power as a result of the storm than at any other time in the state's modern history.
In many areas electricity will not be restored for the rest of the week, Mr Malloy added.
The Associated Press news agency reports that 37 people have been killed in 11 states, mostly because of falling trees, ocean waves, downed power lines and raging floods caused by the storm.
Claims for wind damage are expected to be one sixth of the total sum from Hurricane Katrina in 2005, and claims for flood damage one tenth, the Consumer Federation of America estimated.
As it moved north-east, Irene was downgraded to a tropical storm and then a post-tropical cyclone.
The National Hurricane Center in Miami said an increase in speed was expected over the next couple of days, with the centre of the storm moving over eastern Canada on Monday.
A tropical storm warning for Canada was likely to be lifted on Monday, it added.
Back to work The storm, downgraded from a hurricane, passed New York on Sunday. 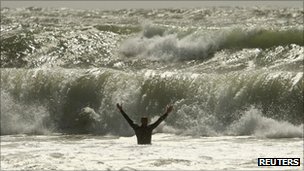 As Irene passed Canada, a brave swimmer waded into the storm-churned waves
More than 300,000 people evacuated from low-lying areas in New York City are now able to return home.
New Yorkers were back to work on Monday, with the city's subway network and its three main airports all reopened.
More than half the commuter rail lines running into the city were suspended or delayed amid lingering flooding and mudslides.
The US air transport network began slowly clearing a backlog after cancellations at the weekend. More than 1,400 flights were cancelled on Monday, according to Flightaware.com, compared with 7,804 on Sunday.
Airports in New York were worst hit by cancellations, but Philadelphia and Boston airports were also affected.
In Philadelphia, officials lifted the city's first state of emergency since 1986. Several buildings were destroyed by the storm, but there were no deaths or injuries.
Further south in North Carolina, Governor Beverly Perdue said some areas of the state were still unreachable. TV footage showed fallen trees and power lines.
Officials in Virginia have begun the clear-up, but say the damage was not as bad as feared.

It's impressive that you are getting ideas from this article as well as from our dialogue made at this place.