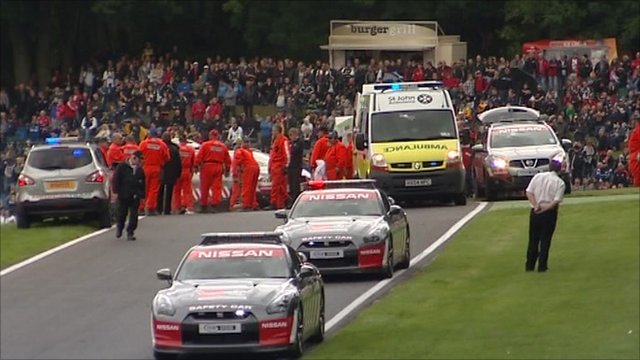 An 18-year-old rider has died after a collision at the British Superbikes Championship meeting in Lincolnshire.
Ben Gautrey fell on the first lap of the Metzeler National Superstock 600 race at Cadwell Park.
After initially being treated on the track, the Southport rider was taken by air ambulance to hospital where he died from head and chest injuries.
Several riders, who were also involved, were uninjured. Race organisers said it was a "tragic and freak accident".
The race was immediately stopped.
'Super young guy' Police and health and safety officials have launched investigations.
British Superbike Series director Stuart Higgs said: "I am so desperately sad that Ben died from the injuries he sustained at Cadwell Park.
"He was a really super young guy on his debut season at national level showing plenty of promise having won the Thundersport GB Moto450 Championship the previous year."
Race winner Ben Wilson, a team-mate of Mr Gautrey, said: "This was a fantastic race and a win that I dedicate it to my team-mate Ben."
Mr Gautrey had been competing for the MWR Kawasaki Team at the meeting.
The British Superbike Championship meeting was held over three days at Cadwell Park, the third time a championship race has been held at the circuit near Louth.
The round at Cadwell Park is the final one before the championship is split into two, with the top six riders going on to challenge for the title in the remaining three rounds.
Cadwell Park staged two rounds of the 2010 British Superbike Championship because of redevelopment work at Donington Park.
at August 29, 2011