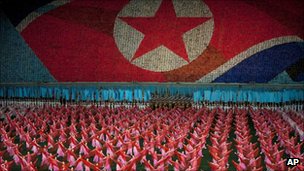 Five South Korean men have been charged with spying for North Korea, South Korean prosecutors say.
The group is alleged to have passed military and political information to the North over the past 20 years.
The alleged ringleader was said to have met North Korea's late founding father, Kim Il-sung, in 1993.
One of the men is a former parliamentary aide. Several other South Koreans are still being questioned by investigators.
Prosecutors say the five men passed on satellite images of major military installations, field manuals of US forces in South Korea and information on politicians from both the ruling party and the opposition.
The ringleader, known as Mr Kim, operated in South Korea under a codename, setting up what prosecutors described as "an anti-national organisation" to send information back to the North, prosecutors said in a statement.
Two other men are alleged to have been responsible for reporting from Seoul and from the area of Incheon just outside the capital, where South Korea's main airport is based.
Officials say they believe North Korea was focusing many of its operations there, with the aim of using the Incheon region as a bridge to infiltrate the country in the future.
All five are accused of breaking South Korea's national security law by engaging in espionage and communicating with the enemy.
at August 26, 2011