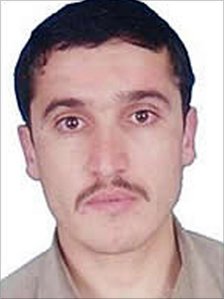 Al-Qaeda's suspected operations chief, Atiyah Abd al-Rahman, has been killed in Pakistan, a senior US official says.
The Libyan militant was killed on 22 August in the volatile Pakistani tribal region of Waziristan, he added.
The official said Abd al-Rahman's death was a "tremendous loss for al-Qaeda", because the group's new leader, Ayman al-Zawahiri, had relied heavily on him.
He would not say how Abd al-Rahman died, but a CIA drone strike was reported in Waziristan on the same day.
Abd al-Rahman was reportedly number two on a list of the five top militants in Afghanistan and Pakistan whom Washington and Islamabad most wanted to capture or kill.
In October 2010, Pakistani officials said they thought he had been killed in a US drone strike in North Waziristan.
'Multiple responsibilities' Believed to be in his late 30s, Abd al-Rahman was a close confidant of Osama Bin Laden, who was killed by US special forces in a raid in northern Pakistan in May.
Abd al-Rahman joined Bin Laden in Afghanistan as a teenager in the 1980s. He later gained a reputation within al-Qaeda as an explosives expert and Islamic scholar.
He retreated with Bin Laden to the Afghanistan-Pakistan border region after the US-led invasion of Afghanistan in late 2001, and became a link to other Islamist militant groups in the Middle East and North Africa.

Senior US official
In June 2006 the US military recovered a letter he wrote to the late Abu Musab al-Zarqawi, the Jordanian who ran al-Qaeda in Iraq, chastising him for alienating rival insurgent groups and attacking Shia Muslims.
Abd al-Rahman is also said to have successfully brokered a formal alliance with the Algerian Salafist Group for Preaching and Combat (GSPC), which changed its name to al-Qaeda in the Islamic Maghreb.
More recently, he was reportedly appointed al-Qaeda's emissary in Iran.
In June, US officials described him as al-Qaeda's operations chief, although previous reports said other men occupied the role.
"Atiyah's death is a tremendous loss for al-Qaeda, because Zawahiri was relying heavily on him to help guide and run the organisation, especially since Bin Laden's death," the US official told reporters on Saturday.
"The trove of materials from Bin Laden's compound showed clearly that Atiyah was deeply involved in directing al-Qaeda's operations even before the raid. He had multiple responsibilities in the organisation and will be very difficult to replace," he added.
The Pakistani daily, The News, reported that four tribesmen were killed on Monday in a US drone strike on a house in the village of Sheenpond, in the Mir Ali area of North Waziristan, close to the Afghan border.
The following day, about eight US spy planes were seen flying over various villages in the Miranshah, Mir Ali and Dattakhel area, it added.
at August 29, 2011