How high-visibility took over Britain 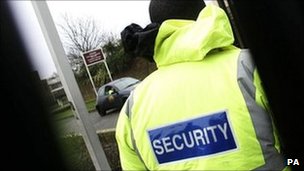 Since arriving in Britain almost five decades ago, high-visibility jackets have become inescapable. Is this a blessing or a curse?
It is impossible to ignore - and that's the very point.
Bright, synthetic and, above all, cheap, the ubiquity of high-visibility clothing means that it surely symbolises the Britain of 2010s in the same way that miniskirts summed up the 1960s.
In the past "high-vis" was associated with hazardous occupations - the emergency services as well as road and rail maintenance workers. Now it is just as likely to adorn security guards, cyclists, car park attendants and joggers - an all-purpose symbol of both authority and safety-first caution.
Kent Country Council is the latest authority to promote its use, heralding its 120 "walking buses" in which children make their way to school together on foot clad in high-visibility gear. UK workwear specialists Red Oak Direct say sales of its high visibility gear rose 22% in 2008/9 and 26% in 2009/10.
To critics, it symbolises everything that is wrong about mollycoddled, risk-averse, health-and-safety-obsessed modern Britain.
But enthusiasts point to its success in reducing traffic accidents and making the jobs of thousands of workers much safer.
What is perhaps most significant, however, is the manner in which this mass-produced garment, available from pound shops the length and breadth of the country, has come to lend its wearers the mantle of officialdom, licensed to give orders by virtue of their day-glo outerwear.

It has become this symbol of spurious authority”

End Quote Rod Liddle Sunday Times
The unquestioning deference offered by it is satirised by that ever-reliable source of social commentary, Birkenhead-based indie band Half Man Half Biscuit, in the song King of High Vis.
Its lyric tells the story of a man who blags his way into music festivals and sporting events without a ticket by donning a fluorescent tunic: "Hard hat, tabard, torch and cocky toolbag / I'm Dave the Spark, or I could be Mike / Paramedics, police, authorised and holy / Be safe, be seen, be anyone you like."
For this reason, high-visibility wear is loathed by Sunday Times columnist Rod Liddle, who found that passers-by obeyed orders barked by him after he donned a flourescent waistcoat for a feature.
"It has become this symbol of spurious authority," he says.
"I find it totally bizarre and depressing that people will do what you tell them as long as you're wearing high vis. Like CCTV, it sums up how compliant we've become."
Nonetheless, the UK's attachment to the fabric is mild compared to that of France and Italy, where motorists are compelled to carry high visibility clothing in their vehicles in case of a breakdown. In France, cyclists are compelled to wear such attire at night. 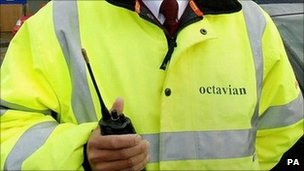 It may not be fashionable, but safety campaigners say bright clothing is a life-saver
It was invented by an American, Bob Switzer, whose ambitions of becoming a doctor ended when he was injured in an industrial accident during the 1930s. While recuperating, he developed a fluorescent paint before fashioning the first item of high-visibility clothing from his wife's wedding dress.
High-vis first came to the UK in 1964 when it was trialled by railway maintenance workers in Glasgow. The 1974 Health and Safety At Work Act and 1992's Personal Protective Equipment At Work regulations - both of which required bosses to guard against potential industrial hazards - ensured their proliferation.
It was not only in the workplace that high-vis took off. An influential 1981 US study found that two-thirds of crashed between motorcycles and cars crashes took place when the car driver failed to see the approaching bike and safety campaigners have long urged pedestrians, cyclists and all other road users to don as bright clothing as possible.
No-one, however, has ever argued that the look is chic. In 2008, the designer Karl Lagerfeld appeared in a French public information campaign attired in a fluorescent waistcoat above the slogan: "It's yellow, it's ugly, it doesn't go with anything, but it could save your life".
Julian Bennett, fashion expert and former presenter of the UK version of Queer Eye For The Straight Guy, concedes that fluorescent overcoats are hardly likely to ever dominate the catwalk.
But he says its effectiveness at keeping its wearers safe means it will always be popular.
"It's just not fashionable," he says. "It's a stay-safe colour.
"But in terms of reducing the accidents, we know it works. Drivers don't always look. If you ride a motorbike or a bike, you want to be seen. If you're a parent, you know its dark in the winter at 4:30 in the evening when your kids are walking home."
Some may hate it. But for others, high-vis will always induce a warm glow
at August 30, 2011