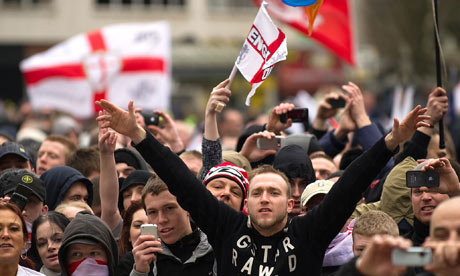 English Defence League members listen to the group's founder Stephen Lennon. Photograph: Leon Neal/AFP/Getty Images
The home secretary has agreed to a police request to ban the far-right English Defence League from staging a march through one of the UK's biggest Muslim communities in east London.
Theresa May said she would outlaw any marches in Tower Hamlets and four neighbouring boroughs – whether by the EDL or any other groups – for the next 30 days, having "balanced rights to protest against the need to ensure local communities and property are protected".
She added: "I know that the Metropolitan police are committed to using their powers to ensure communities and properties are protected."
Police sought the ban after the EDL – which has seen widespread public disorder at earlier rallies – planned to march on 3 September through Tower Hamlets, which has a significant Muslim community, many of Bangladeshi origin.

In a statement the force said it made the request following information that prompted fears that the march could cause "serious public disorder, violence and damage". It added: "Tactically we believe this is the best option to prevent this."
Chief Superintendent Julia Pendry warned EDL supporters to stay away. "We have made this decision [to seek the ban] based on specific intelligence and information, and our message is clear: we do not want people coming into the areas to attend these events."

The march had been vehemently opposed by community leaders, among them the two local MPs and the borough's mayor, as well as a series of Muslim and Jewish groups. Fears that it could spark violence were exacerbated following this month's rioting in many parts of London.
The EDL emerged in Luton, another strongly Muslim area, in 2009. While it purports to oppose "Islamic extremism" the group insists it is not racist. However, its marches, aimed mainly at Muslim communities, have been seen as extremely provocative. A Guardian investigation into the EDL found repeated racism and threats of violence among supporters.
Nick Lowles, director of the anti-extremist campaign group Searchlight, called May's decision a victory for common sense. He said: "The EDL clearly intended to use the proposed march to bring violence and disorder to the streets of Tower Hamlets. Their plan has been foiled."
The veteran campaigner Peter Tatchell said that while he abhorred the EDL, he believed the ban was a "complete overreaction" and would prove counter-productive. He said: "I'm not sure we can defeat anti-democratic groups like the EDL using anti-democratic methods like banning marches. A far better tactic would be peaceful counter-marches and exposing the views of the EDL to public scrutiny."

Earlier this month May banned an EDL march through Telford, although the group was still able to congregate. Opponents urged the home secretary to follow suit in east London, particularly after links emerged between the EDL and the Norwegian mass killer Anders Behring Breivik.
The gunman repeatedly praised the group in his rambling manifesto and claimed he had hundreds of EDL supporters as Facebook friends.
The EDL insisted any admiration was one way and it did not condone his views.
The group has struggled for legitimacy, even amid evidence it has picked up supporters as the better established far-right British National Party has been beset by internal divisions. According to Searchlight, the EDL has active support from people involved in earlier far-right groups, including the even more extreme Combat 18 and National Front.

In February it attracted some unexpected support from the Daily Star newspaper, which tacitly endorsed its anti-Muslim views and said 98% of its readers supported them. But this lasted less than a week, with the paper's owner, Richard Desmond, saying it had been done without his knowledge.
at August 26, 2011