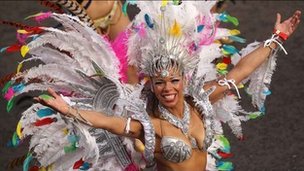 The colourful celebration is one of Europe's biggest street parties

Police say the Notting Hill Carnival has been peaceful, with 214 arrests so far during the two-day event.
Officers are investigating the stabbing of a man, thought to be in his 20s, near the London carnival on Monday.
He is said to be in a serious condition in hospital. Three people have been arrested on suspicion of causing grievous bodily harm.
More than one million people were expected to attend the carnival, billed as Europe's biggest street festival.
The festivities drew to a close 90 minutes earlier than last year, at 19:00 BST.
More than 6,500 police officers were on duty, with 82 arrests made on Sunday and 132 arrests so far on Monday.
The annual two-day celebration of Caribbean culture sees parades of colourful costumes and floats run along a procession route from Ladbroke Grove to Westbourne Grove and Chepstow Road, along with about 40 sound systems.
One carnival goer told the BBC: "The police have been fantastic today, there's people from all over the world here representing the carnival and we're having a good time despite the London riots."
Another said: "It's absolutely fantastic, I love Carnival, bring on 2012." 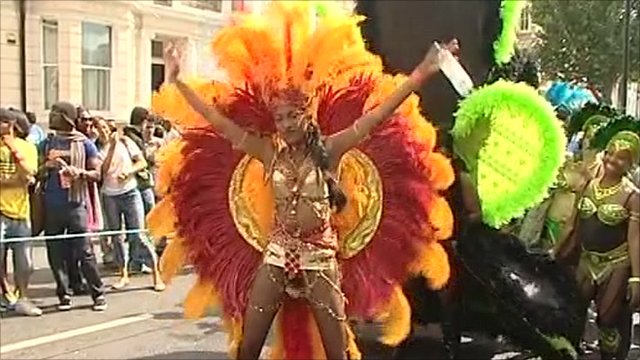 Click to play
London Mayor Boris Johnson: 'This is a great event'
Kit Malthouse, deputy Mayor of London with responsibility for policing, said carnival goers recognised what was at stake after the London riots.
"This year a lot of the floats were on earlier, there was obviously a much bigger policing presence, you can sense a change in the atmosphere from previous years, in that people are kind of on their best behaviour because they know the world is watching," he said.
Tim Godwin, the Met police's acting commissioner, said carnival organisers, float drivers and band leaders had all come together and the "support for the police from the committee has been outstanding".
London Ambulance Service said 241 people were treated at the event, with 27 taken to hospital.
The arrests were for a variety of offences including drugs possession, public order, theft, criminal damage, robbery and assault, the Metropolitan Police said.
Officers used automatic number plate recognition outside of the carnival area to target potential troublemakers and preventing them from getting to the event.
The stabbing happened at around 18:00 BST on Ladbroke Grove, said the Met.
Officers said the man was found with possible stab wounds to the abdomen and hand.
At 19:30 BST an area outside a three-storey block of flats on Ladbroke Grove, close to the junction with Kensal Road, was cordoned off after a person suffered serious injuries.
A Met police officer said it was believed an object was thrown from a flat window and hit the person on the pavement below.
'True spirit' In 2010, there were 243 arrests across the two days.
Some roads and Tube stations were closed for the carnival and Transport for London issued a guide with full details. 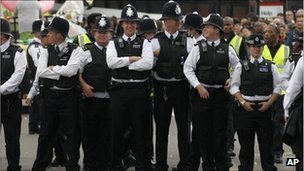 Police officers gathered at the start of the carnival route to try and prevent disorder
Met Commander Steve Rodhouse said: "Through effective stop and search we believe we have deterred and prevented trouble from taking place.
"We will make sure that our officers are out stopping the right people."
Elsewhere in London there were more than 4,000 additional officers "as well as the thousands who are normally on duty", Mr Rodhouse added.
London Mayor Boris Johnson issued a rallying call at the start of Monday's celebrations to "let the true spirit of London shine through", hoping the carnival would help heal wounds left by the riots.
"It's right that carnival goes ahead so we can show the world that the overwhelming majority of London's people are decent, law-abiding citizens who respect the law, love their city and want to celebrate our vibrant, diverse and historical culture," he said.
at August 29, 2011